An elderly fellow, with a fingertip glued to his iPhone camera waiting for his heart rate to pop on the screen. A new dieter stepping onto the scale, sighing dejectedly while peering at her smartphone.

And this is the new reality of personal health care.

Users are getting more and more inclined towards the mHealth apps than their physicians.

A recent study  by PricewaterhouseCoopers shows healthcare as one of the top 3 biggest mobile trends for 2016 based on the fact that 71% of the US adults who own web-enabled smartphone or other wireless device have at least one health care app on their smartphone — a direct jump of 16% to 32% in just two years.

Smartphones and wearables are becoming health and fitness tools, providing countless applications to motivate and help their users to organize their health. The apps have even gone further, with a subset claiming to double for a medical device — to track the heart rate, treat acne, and even detect cancerous moles.

But amid all the burgeoning of such apps, federal regulators and doctors are raising the “unreliable and dangerous” alarm against these programs claiming to diagnose or treat medical conditions.

For April Lien, an app that could detect cancer was like a miracle. Losing her husband to skin cancer, she was in constant worry that her two daughters would be at risk too, taking them to their dermatologist thrice a year. 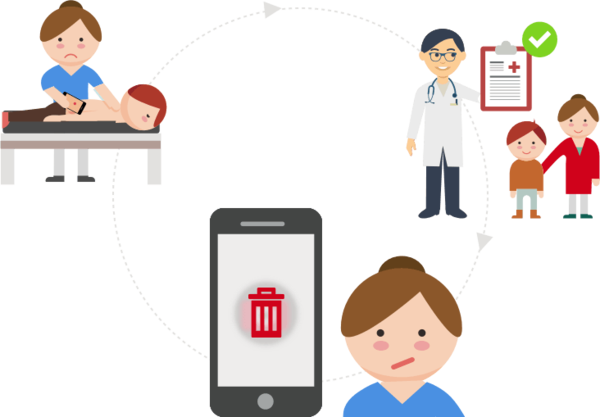 When April used a cancer detecting app to photograph one of her daughter’s mole, the app gave her a result instantly.

The result, which claimed the mole to be red, freaked out April. She rushed her daughter to the doctor, who assured them that the mole was just benign. April deleted the app.

The story just shows how one of more than 165,000 health and wellness apps is letting the users down by being unreliable.

One of the accelerator in the unreliability of medical apps is that most of these aren’t regulated by the FDA. Only a handful of apps that meet the strict medical device criteria requires FDA’s stamp of approval.

The 2011 banning of the alleged acne-fighting medical apps, AcneApp is a great lesson for all us developers and healthcare companies.

Its makers, the Houston-based DermaApps claimed that their app could “KILL” acne using the light given off from a user’s smartphone, which the FTC found not substantiated by “competent and reliable scientific evidence.” This resulted in the app getting banned and not surprisingly, leaving the owners non-existent.

In an editorial in The New England Journal of Medicine, Nathan Cortez (@nathancortez) an expert in medical technology law and regulation at Southern Methodist University’s (@SMU) law school, Dallas, cautioned that unreliable and unregulated health apps could pose a significant threat.

“There’s just no plausible medical way that some of these apps could work. Besides wasting your money, these apps may actually do harm,” states Cortez adding, “If you’re diabetic and your app is misreading your blood glucose levels, you may give yourself more insulin than you need and go into diabetic shock.”

It is not just the legal experts that are sweating hard. More and more doctors are expressing their concern about the people approaching medical apps, most of which don’t require the FDA scanner, for medical guidance.

“Untested mHealth apps are like a bad doctor”, said Karandeep Singh, a physician, and professor at the University of Michigan Medical School.

He further pointed that the users are losing their safety net by using such apps.

“An app intended for people with depression and posttraumatic stress disorder asks them to log their moods, such as “worried” or “irritable.” But when users report feeling unsafe or suicidal, the app doesn’t recommend calling a suicide hotline or seeking immediate attention”, adds Singh, who recently evaluated the quality and safety of hundreds of mobile health apps.

But despite all these warnings, for some users, these mHealth apps are blessing in disguise.

At the age of 35, when most women think that their biological clock has ticked away, Alissa Walker (@awalkerinLA) was “trying” to get pregnant.

Walker, an urbanism editor at of @Gizmodo and now a proud mother of a one-year-old daughter, swears that it was the app that helped her — and 100,000 more women — get naturally pregnant when her only hope left, as per the doctors, was IUI.

Another good example of a well-made app is HemMobile — a product of Pfizer — which helps hemophilia patients track their infusions.

Every aspect of the app, from display to medical terminology, was supervised and approved by a company review committee that consisted of a physician, a regulatory professional, and a legal expert.

Bartholomew J. Tortella, a medical director on the hemophilia team at Pfizer supports the system, said:

“It’s a very efficient system. We sign off on the idea, it gets built, it comes back, we test it, and we approve it.”

The app shows us how a good and effective health care app is a result of the collaborations among the developers, physicians, and the health law experts.

As one of the professional mHealth developers, we believe that the possibilities for the health care and medical apps are endless. But what will make these endless possibilities go round is these healthcare apps coming under the regulatory radar.

“Healthcare is one of the most regulated industries in the U.S. Regulations and standards for these apps will eventually become commonplace. Mobile health technology developers will have to deal with rules just as the ride-sharing services did when taking on the taxi industry, but to an even greater degree”, says Bradley Merrill Thompson, a lawyer in Washington who represents medical device companies.

With two-thirds of the Americans are already favoring digital health management over the physical one, the most reliable medical apps should be regulated & compliant, include medical and legal experts, and perform as they claim.

Apps that will do otherwise won’t only confuse the customers and erode their confidence in the health apps, they might also get penalized for the violations.

We know that mobile health is a nascent field right now but it’ll surely be fun to see it grow.

Efficacy, Effectiveness, and Engagement: Mobile Health and A Field of Endless Promises

An elderly fellow, with a fingertip glued to his iPhone camera waiting for his heart rate to pop on the screen. A new dieter stepping onto the scale, sighing dejectedly while peering at her smartphone. And this is the new reality of personal health care. Users are getting more and […]
Do you like it?0
0 Read more

What Every Health Entreprenuer Should Know About HIPAA

Most entrepreneurs perceive Health Insurance Portability and Accountability Act (HIPAA) standards to be a hurdle that would be difficult to overcome and may hamper the success of their venture. This however, is really not the case. HIPAA is fairly easy to deal with IF the venture operates with the goal […]
Do you like it?0
0 Read more

Just recently, we talked about HIPAA Security Rules, the national standards that require healthcare organizations and the associated businesses associates to protect the Electronic Protected Health Information (ePHI) of an individual. Now, it’s time to have a brief discussion on HIPAA Privacy Rules. You already know that whereas security rules […]
Do you like it?0
0 Read more

Here we are back again with next part of our series on HIPAA Security Rule. Today we will talk about Physical Safeguards which primarily deals with the physical access to Protected Health Information (PHI). All the PHI gathered electronically or on paper must be housed in some physical location. Physical […]
Do you like it?0
0 Read more

PHI, ePHI, Privacy, Security, HIPAA Security rules, HITECH act – struggling to grasp these terms and how these apply to you? You are not alone… Healthcare Information Portability and Accountability Act(HIPAA) lays out sets of rules and guidelines that every covered entity and their business associate must follow to protect […]
Do you like it?0
0 Read more

Thank you for subscribing.